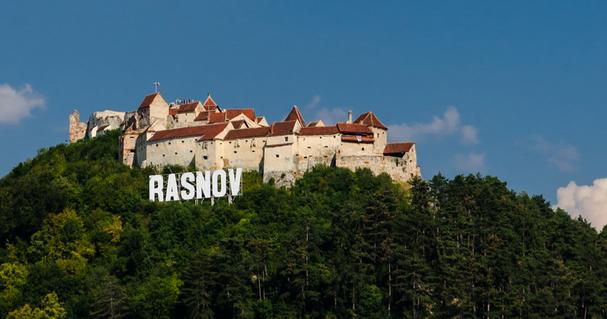 The rustic fortresses were part of a defending system of the Transylvanian places that were exposed to invaders’ attacks.
The place called Rasnov is mentioned for the first time in documents that date from the 12th century (year 1331). And during the Middle Ages and Modern Ages, Rasnov was one of the 12 villages that formed the district of Brasov, district that was mentioned in documents for the first time in 1377. Rasnov started to progress in the 13th century, but due to the Tartarian invasions in 1241, its developing ceased, as Burzenland (Tara Barsei) was ravaged. In order to defend themselves from the future invasions and from the feudal noblemen’s violations, the inhabitants of Rasnov built up a retreat and defense fortress on the top of a hill situated nearby.

Rasnov FortressRasnov Fortress (Rosenau in German), is located on a rocky hilltop in the Carpathian Mountains, 650 ft. above the town of Rasnov. First mentioned in an official document in 1331, the fortress was built by Teutonic Knights as protection against invading Tartars and was later enlarged by the local Saxon population. Strategically located on the commercial route linking the provinces of Transylvania and Walachia, Rasnov differs from other Saxon fortresses in that it was designed as a place of refuge over extended periods of time. As such, it had at least 30 houses, a school, a chapel and other buildings more commonly associated with a village.

The last siege of Rasnov Fortress took place in 1690 during the final Ottoman invasion of Transylvania. Damaged by fire in 1718, it was rebuilt the following year. The next major damage occurred as the result of an earthquake in 1802. The fortress was last used as a place of refuge during the revolution of 1848 and was abandoned after that.