Transalpina is an old road but has just recently been paved (2009) so for the most part the quality of the asphalt is perfect. Of all the
roads in Romania it reaches the highest altitude (2145m – 7037ft) in what is called “Pasul Urdele”. 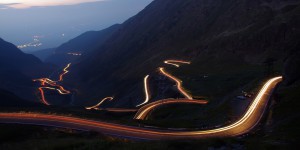 The views from the road are extremely nice and you will want to make several stops to take in those views. Fortunately, when we visited
(a weekday around the end of June 2012) the road was quite empty. When this happens you will have plenty of time to take pictures from your car. The drive itself is not easy there are many switchbacks many of which over ascending terrain.

Lake Vidraru is an artificial lake in Romania. It was created in 1965 by the construction of the Vidraru Dam on the Argeş River. It lies in the shadow of the Făgăraş Mountains. A village lies submerged at the bottom of this lake. Vidraru Lake is a lake, with 465 million cubic metres of water, with a length of 10.3 km and a width of 2.2 km, thus accumulating a total area of 876 hectares and maximum depth of 155 metres. Vidraru Lake is a reservoir lake created in 1965 on the Arges River for electricity production.

On Lake Vidraru can practise extreme sport of bungee jumping

In an average hydrological year, Vidraru hydroelectric power plant located underground, can produce approximately 400 GWh of electricity. It has an installed capacity of 220 MW.
The town of Curtea de Arges coming to DN1 (Cartisoara village, SB), the road passing through hydropower plant to Vidraru the dam, followed by right lake is spectacular Vidraru Transfagarasan (DN7C).
Mount Plesa was famous statue of Prometheus by lightning in his hand, a symbol of electricity. Only a few hundred metres of the dam tourists can go to the House Argeseana “and the pier where the practice of leisure boat racing.